Have you heard about COB LED grow lights, and now you’re wondering what all the fuss is about?

In this article, I want to go over the COB LED phenomenon. I will explain what they are, and how they’re a significant development for indoor grow light technology and also why they’re being rapidly deployed into many indoor grow rooms all across the planet.

Has LED technology finally become a viable and affordable alternative to replace the big, bulky, and hot HID grow lights?

Do COB LEDs justify the cost?

Keep reading and let’s find out!​

What is a COB LED?

A COB (short for Chip-on-Board), is an LED packaging technology that describes mounting multiple LED chips directly onto a substrate to form a single module. Multiple LEDs, minuscule in size, are wired and packaged together into a single ceramic or copper board so that they function as a sole light source.​

When a COB LED package is energized, it appears more like a lighting panel than multiple individual lights as usually the case with other LED packages, like when using several SMD LEDs mounted closely together.​ 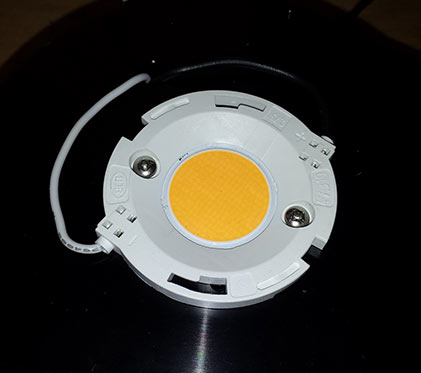 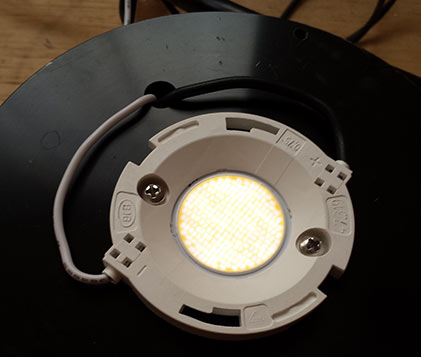 Images show a very simple Chip-on-Board LED setup, with a single COB mounted on a passive cooler. Left is unlit. Right is lit and dimmed down to make the LEDs visible.

Due to the small size of the LED chips (imagine a quarter), Chip-on-Board technology allows for a much higher packing density than surface mount technology (SMD).

While there still are reasonable applications to using HID bulbs, the advantages of using COB LED grow lights outweigh the disadvantages.

Does this technology justify the cost?

The introductory price of using COB LEDs in an indoor garden is initially higher, but they pay themselves off in the long term due to several advantages.

To make things easier here’s a nifty little chart for you:

Now here’s a breakdown that helps explain the chart:

For grow lights, efficiency is measured in µmol/j or, more simply, the amount of photosynthetically active photons that are produced per watt consumed at the wall. This can also be interpreted as µmol per watt.

High quality LEDs have hands down the highest usable lifespan of any grow light technology available. Even if the initial investment is higher, a quality LED fixture will last AT LEAST 30,000 hours. So it’ll pay itself off over time.

The cost of a 1000W, double-ended replacement lamp is about $140, which averages to $28 per year if we assume a lamp will be replaced once in the first five years. Lamp replacement cost increases to $30 to $35 per year when the labor to replace the bulb is included, but this is small compared to the approximately $600 per year annual electric cost to operate the fixture. Adding the cost of lamp replacement increases the five-year cost of operation by about 5%.

By comparison when operated at favorable temperatures, individual LEDs generally have a predicted lifetime (to 70% of the initial light output) of 50,000 hours, about 8.35 years when used an average 16 hours per day or 6000 hours per Year.​ 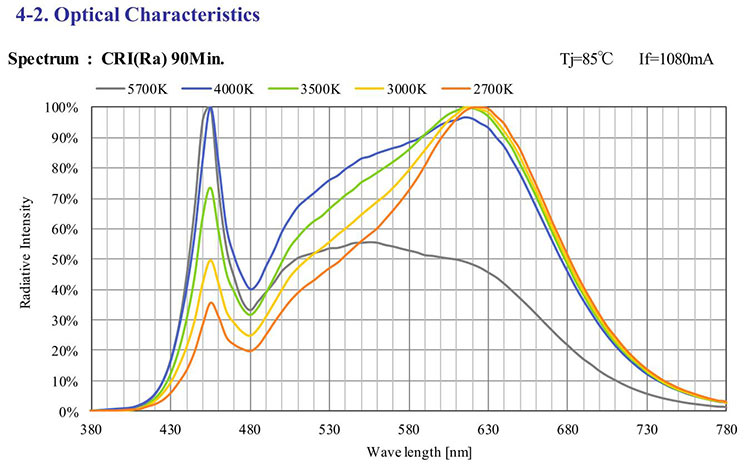 This is an example of the spectrum you’ll find in most high quality COB LEDs. Please note that although there are always variations between different companies, it’s mostly the same. A 3500K 90CRI COB from any manufacturer should function very closely to any other 3500K 90CRI COB of the same voltage class.

If you’ve read about spectrums before, you’ll notice that no other single-point light source offers such a broad and targeted PAR spectrum.​

Here’s the spectral reading of a few 3100k CMH Bulbs for comparison.​

One of the main reasons that COB LED grow lights have made their way so quickly into many grow rooms is because of their HIGH Color Rendering Index (usually over 80) and broad spectrum.

CRI stands for Color Rendering Index, and describes how the color of a light source changes how an object appears to the human eyes and how well subtle variations in color shades are revealed. The higher the CRI, the more realistic things look.

Regardless of the COB manufacturer, whether CREE, Citizen, Bridgelux, etc. They all offer at least 70 CRI Broad Spectrum chips and which usually can go to up to 97 CRI.

This means no purple, or extreme orange, or red or yellow but high quality white light showing realistic colors.​

Allows replacement of HID bulbs without any loss of light intensity​

Up until now LEDs were a choice for those who needed low power. But not anymore. As of right now LEDs are significantly more efficient at producing photons than any HID technology. Meaning that at the same power consumption, high quality COB LEDs will outperform HID technology at providing quality light for your canopy.​

HIDs and COB’s are both single-point light sources. But since COBs are comparatively easy to handle and position, we have a very different situation.

Instead of using one single light source, COB LEDs can be spaced for better uniformity in order to avoid hotspots or low intensity areas in the grow room.

A practical example would be that instead of having one big 600W HID fixture that would create a hotspot, we could have 6 COB LEDs producing the same amount of light, while consuming less and providing a way better spread.​

This is a tricky one, but bear with me. A 500 watt fixture will produce 500 watts of heat, period. Regardless of whether it is an HID, a CFL, or an LED. There’s a common misunderstanding that 500 watts of LEDs is cooler than 500 watts of HID, and while that is usually true, it’s not for the reasons people think.

The reason is mostly Infrared radiation. Far infrared is radiant heat, it’s the same as the feeling of warmth from the sun on your face and the heat from a coal fire. It is even the same form of heat emitted by your own body. And LEDS (unless specifically designed to do so) produce very little infrared light, now compare that spectrum to an HPS and you’ll soon understand why HPS lamps are always so hot.​

COB LEDs Compared to Other Types of Grow Lights

Here’s a chart comparing COB LEDs to other types of grow lights. I ranked each light on each quality from 1-5, then added the points up to determine which lights are best.​

Here’s a simple breakdown to explain the chart:

Where do COB LEDs beat HPS?

Where do HPS beat COB LEDs?

Where does COB LEDs beat MH?

Where does MH beat COB LEDs?

Where does COB LEDs beat CMH?

Where does CMH beat COB LEDs?

Where does COB LEDs beat CFL?

Where does HPS beat COB LEDs?

COB LEDs vs. Other LEDs​

Remember that COB LEDs are still LEDs, they’re basically the same technology in a different package. So there isn’t much to compare other than light distribution.

While COB LEDS do provide an excellent light intensity, they’re not exactly the best when it comes to spread, because COB LEDs are a single-point light source (meaning all light comes from a single point in space). If we remember that light drops significantly the further away you’re from the source we can see how it’s easy to leave a few “dark” spots when using COB LEDs.

This is why manufacturers spend a lot of time designing their lamps figuring out the best spacing for the most even light distribution over the canopy.

And this is where small SMDs have an advantage over a COB LED, being of such a small size you can place many of them very close to each other and form a light panel. The problem here is ensuring that the LEDs have enough light intensity to justify the increased cost of manufacturing such a panel.

Since as of right now COB LEDs are just entering the market there are very few companies that build COB LED based grow lights. Some of them are ridiculously expensive, but if you know where to look, you’ll find that there are some really, really good opportunities to buy.

I’ve taken the time to gather and review what I believe to be the best options available so you can have an easier time making a choice.​

The CXP-250 is Pacific Light Concepts latest toy. It’s designed to be used industrially as an array of bars to place over the canopy with a high and even intensity across the entire canopy. An array of CXP-250’s can deliver any intensity the grower desires for any specific crop. And at a starting price of $499.00 their prices aren’t really the most affordable, but their quality is above all the marks!

Best Bang for the Buck 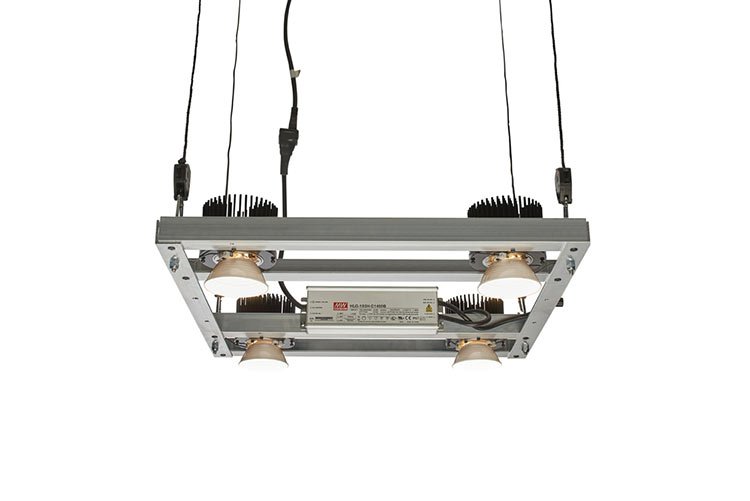 With a price range between $229.00 to $1,099.00 Timber definitely has something going on and an option for every need. Their pricing beats a purchasing a Ceramic Metal Halide grow light while adding all the benefits of switching to using COB LEDs, like the improved spectrum, less heat and increased efficiency.

While their design is rather simple they offer a very powerful and useful grow light. For instance, their 200W square fixture is recommended for a 2’ by 2’ space, but it will provide excellent lighting to a 3’ by 3’ space, and even then it will provide a PPFD of 600 µmol/s which is in the high performance range photosynthetic range for ANY CROP. This is affordable power.

Anyone can assemble their own COB LED grow lights with just a little guidance!​

When it comes to COB LEDs I always recommend DIY! One of the main advantages of using COB LEDs is that there are only a few of components and that they all fit together in a very straight forward way. You do not need to be an electronics expert to assemble your own grow light anymore! And not only will you be engaging in a very fun project, but you’re also going to save a lot on the cost of labor.​

I’m already working on a DIY COB LED guide so stay tuned if you feel like working on a very neat and simple project!​ 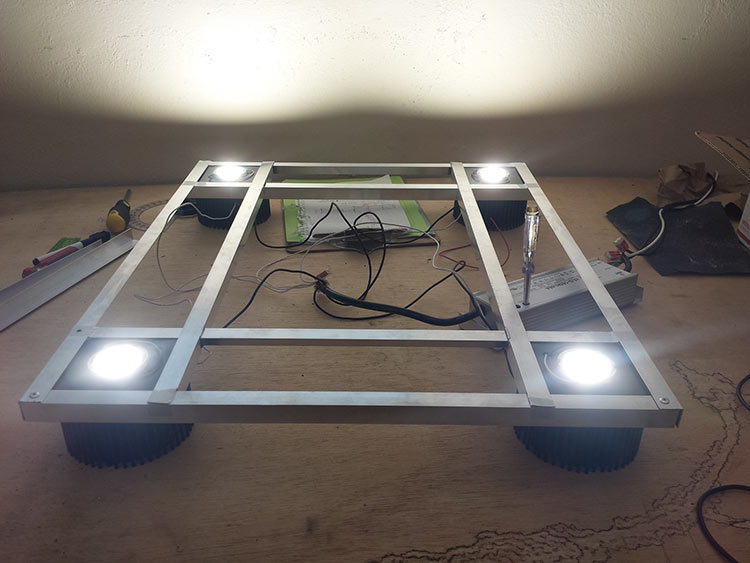 An example of a fairly basic DIY COB LED Grow Light fixture that I assembled in a few hours to use in my garden.

That’s it! I hope this guide served its purpose and that you now know the benefits and downsides of COB LEDs if you’re thinking about switching your old HIDs over to the newer LEDs technologies.

Remember that technology is always evolving and what is true today may not be true tomorrow. So keep an eye out for new guides in case any new breakthroughs happen. And if they do, I’ll make sure to write another guide to dispel all of your doubts!

If you have any doubts or questions or think there’s something I didn’t cover, feel free to leave a comment and I’ll do my best to help!